When transferring massive amounts of important documents onto virtual servers, security is a common concern. A ‘cloud’ doesn’t sound safe—it sounds like anyone can reach inside and take what they want.

People think that since something so intangible can’t be impenetrable, on-site servers are a smaller risk. You can see them, touch them, and put padlocks on them. What could be more secure?

Cloud networks, for one. The fact is that their security measures frequently surpass those of traditional corporate infrastructure. Just because you don’t see where your information’s going doesn’t make life in the clouds any more dangerous: virtual servers can be just as safe as physical ones—and often safer.

2. It’s more flexible than you think.

Cloud platforms grant you scalability, which translates to flexibility, efficiency, and ultimately, less expense. When you need more capacity, you get more, and when you need less, you get less—and you pay only for what you get.

Imagine a world where every business needed its own power supply. Instead of getting electricity from the city infrastructure, your building would have its own generator, with all the headaches that come with it. You’ll need a place to put the generator (which will be big and noisy), you’ll need someone to run it, and you’ll also need to regularly buy parts and fuel. You’ll also have to manage periodic upgrades. Sound familiar?

And forget about scalability: your generator’s only going to produce as much power as it was designed to. If there are times when you don’t need so much capacity—or, worse, times when you need more capacity—there’s really nothing you can do.

It makes sense for electricity to be a utility. So does computing. Any cloud network will be far more responsive to your needs than a traditional in-house server. It’ll save you time, aggravation—and money.

3. It means more freedom for everyone.

Cloud technology tears down barriers. It makes no difference whether they’re barriers in distance or time: using a cloud to its fullest flexibility, you can store and transmit data from servers scattered around the globe. That is, the servers will usually be in your region, but they can be in other countries if you like. At the same time, these servers will act as the edge locations for your end-users. This saves everyone’s time. It also improves latency and security

Integrating yourself into a global server network through the cloud will boost communications and allow you to better manage and control your business.

4. It gives you the power to make worlds.

Thanks to advances in technology, you can now use the cloud as an extension of your current network, creating your own private virtual cloud where you have full control over the creation of subnets, enhanced control over the security configuration of network gateways, and more.

The cloud becomes the glue holding your organization together. However, instead of stiffening up, your organization will have more freedom, more flexibility, and more control over the resources within your cloud.

Some people worry that files on the cloud will be lost if servers go down. At the very least, they think the information will be inaccessible for some time. Neither is the case, actually, and with all the features built into the cloud platform, it’s really the safest and most reliable way to store your documents.

Cloud systems give you the ability to store your files redundantly, making them 400 times safer than if they were on a disk drive in an on-site server. In addition, you can also store your documents on multiple servers in different areas, which protects you from a power outage in any one location and automatically replaces any failing nodes.

Using these strategies, your files on the cloud will always be safe and accessible virtually all of the time.

Putting sensitive documents on the cloud will become increasingly popular. For things like medical records and government contracts, cloud providers employ state-of-the-art security features. These include firewalls, multifactor identification, SSH Keys, Identity and Access Management, and security groups. In this case, the flexibility of cloud systems translates to quick responses—they can and will upgrade their defenses as soon as upgrades become available.

When creating a virtual private network, taking full advantage of the cloud’s capabilities will grant you additional security so heavy it easily meets the standards of the U.S. departments of State, Energy, Agriculture, and Treasury.

Some people might not like the idea of using the cloud as a foundation for new applications. Again, that’s just a trick of the langue: cloud systems aren’t as stable as on-site systems—they’re even more stable.

Plus, with clouds, you don’t have to tear down the foundations every time you change something. No longer will you have to put up with the limitations of standardized software: now you’re free to create custom applications and complex workflows that bend to your needs, instead of the other way around.

More and more companies are adopting the cloud for all the above reasons. Increasing numbers of people are attracted to its security, its scalability, and its transforming effect on business.

Cloud systems provide cost-effective solutions that save you money on equipment, service contracts, personnel, and electricity. Putting all your information on the cloud may seem like a big leap, but that’s the way the wind is blowing. The revolution has begun, the IT industry is changing, and so must you. Now is the time to jump into the cloud. 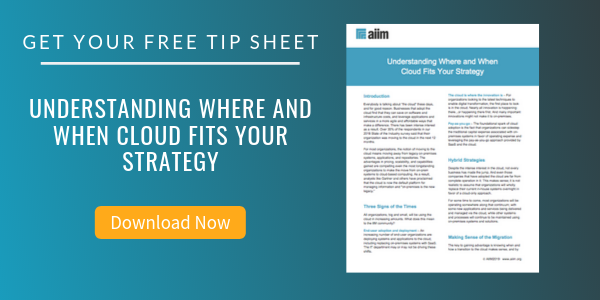