Digital Transformation: What Part of Being Blockbustered Don’t You Understand?

It has become almost standard fare in most presentations involving Digital Disruption to bring up the Blockbuster and Netflix example. So I thought it might be worthwhile to quickly review what happened to Blockbuster and then think a bit about other radically disruptive scenarios in a few other Industries.

The story starts in 1985. David Cook sold software in the oil and gas industry. There was a sharp downturn in that industry, and he decided to open the first Blockbuster store in Dallas. Blockbuster grew rapidly, and by 1994, it was sold for $8.4 billion to Viacom.

A few years later, a fellow by the name of Reed Hastings was annoyed at being hit with $40 in late fees from Blockbuster for a rental of Apollo 13, and decided -- at a point when Blockbuster appeared invincible -- to do something about it. Netflix was born.

I will add as a personal side note that in 1999 my middle son William, at the peak of the Blockbuster era, sold me a $15 Blockbuster card for $15. I didn't realize it until a few weeks later, but there was only $1.72 on the card. He eventually wound up in software sales, likely indicating that long-term career choices are hinted at early in a child's development. But all of that's another story. 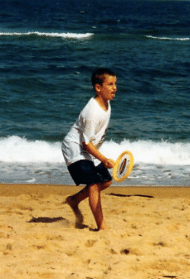 By 2004, Blockbuster had hit its peak with 9,000 stores globally and 5 billion dollars in revenues. At the same time, they separated from Viacom and launched their own DVD-by-subscription service -- about seven years after Netflix launched. By 2013, what was left of Blockbuster - now owned by Dish - was gone, and the doors were shut.

Let's take a look at a few more examples.

This first chart shows the Google search history for Myspace. It doesn’t take a rocket scientist, so see the point at which the “Facebook effect” kicked in. The speed with which this one happened is sometimes hard to believe.

Who could have forecasted in 2007 when the iPhone was introduced that it would ultimately lead to the demise of the leading handset provider in the world - in the space of just a few years: 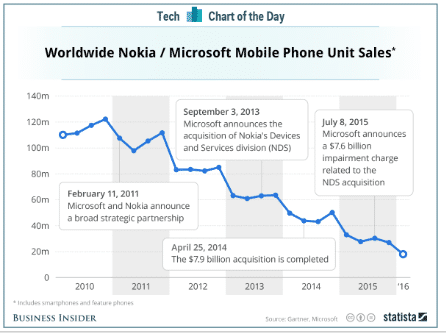 The tidal wave of digital photography and Kodak's inability to adjust to that tidal wave is well-chronicled. Certainly, the lights should have gone on in 2002 when the sales of digital cameras surpassed the sales of film cameras. 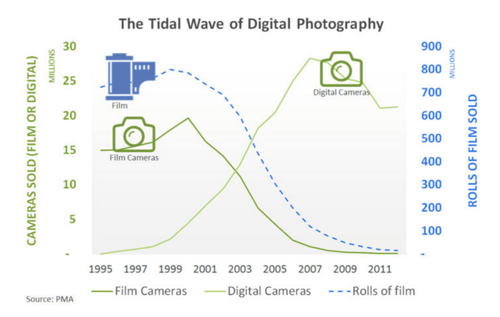 Another cell phone example, and another victim of the disruption created by the iPhone.

The speed with which the business model for print publishing collapsed is still stunning— less than a decade, almost all of the value gone. The amazing thing about this story is that the value here -- largely driven by classified advertising -- wasn’t “acquired” by another disruptive player.  Rather a disruptive player created the conditions under which billions in value was simply distributed in tiny chunks to millions of end users. Craigslist. 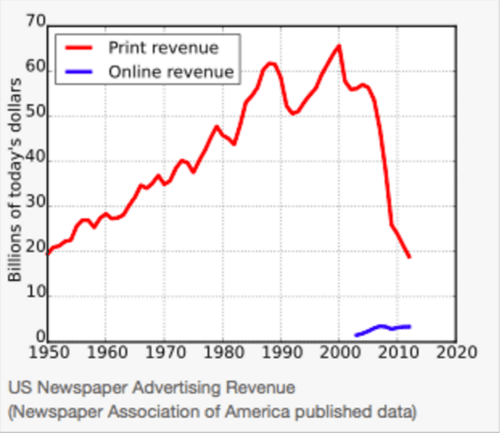 And lastly, who can forget the example of printed books. The respective curves tell the story. We see the results all around us in the form of closed Borders and Barnes and Noble stores. 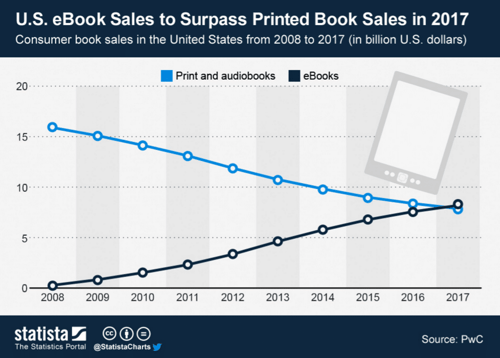 And lest we think that the content management space has been immune from ignoring the forces of disruption, here are two personal examples. I can remember back in 2007 sitting in meetings of established ECM players, and asking what they thought the impact of MOSS (Microsoft Office SharePoint Services) would be, and hearing the…”Interesting, but they don’t do what we do” response.  And a few years later, I recall hearing the same thing from some established vendors after hearing a Board briefing by Box.

All of this poses a couple of questions for any business.

Where is your disruption coming from? Odds are it is coming from someone that right now you think is irrelevant to you.

What are you going to do about it? Have you tied your content strategy to your transformation strategy? 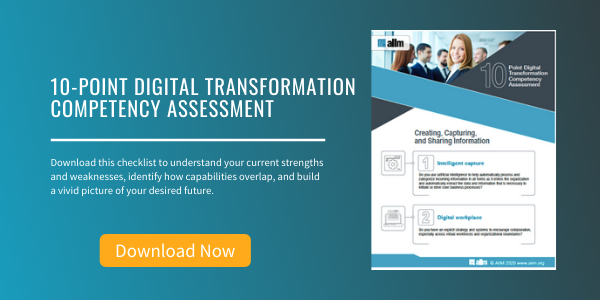