A Brief History of Artificial Intelligence 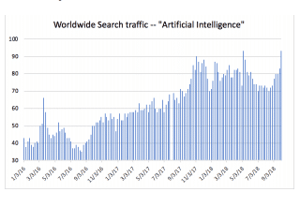 This is ironic because AI has actually been with us for decades, not months. People have been thinking about the relationship between people and machines going all the way back to ancient times, and process automation goes back to the early 20th century. Frank Chen, a partner at Andreessen Horowitz, does a great job discussing the origins of modern AI in AI, Machine Learning, and Deep Learning: A Primer. He notes that in the Summer of 1956, a group of computer scientists came together as the Dartmouth Summer Research Project on Artificial Intelligence to program computers to behave like humans.

“Expert systems” – a form of AI – emerged in the late 70s and really took off in the 80s and allowed a person to create encoded rulesets to automate specific tasks. Airlines are one example of how they used expert systems to help with ticket pricing and trip provisioning.

This core focus of AI – understanding exactly how something is done, turning these steps and actions into rules, and computerizing them – governed the discipline until recently. So what’s so different now about AI, and how does it need to be incorporated into your thinking about process automation?

All along, a different variation of Artificial Intelligence– based on emulating the human brain and how it learns, or machine learning – co-existed with this rule-based school of AI. But optimizing machine learning struggled for many years from a lack of computing power, a lack of data, and a lack of resources. Obviously, all of that has now changed. All around us are examples of the triumph of machine learning and its potential to create exponentially greater possibilities than traditional rules-based approaches.

So as you consider this short history, what kinds of questions should you be asking about AI? In particular, how should you view AI in the context of automating the processing of documents? Learn about 5 questions to determine whether your AI solution for document automation is really intelligent.