Atle Skjekkeland joined AIIM in 2004 as Managing Director for its European operation, was promoted to Vice President for AIIM in 2006, and became Chief Operating Officer in 2011. He is responsible for marketing, sales, delivery, and support of all AIIM products and services, which include events, webinars, training, research, and membership. Atle is the architect and driving force behind AIIM’s Certificate programs, which have had 20,000+ course attendees over the last 5 years. He has delivered workshops across the world, and established training partnerships on almost all continents. He is also the architect behind the new Information Certification introduced in 2011 and available worldwide via Prometric exam centers. An early adopter of social media to improve member communication, brand exposure, and Web traffic; over the last few years he has developed AIIM’s strategy for using the Web as a platform for education and networking. Atle holds a Master’s degree from the Norwegian School of Economics and has 15+ years of experience working within IT. He is eager to find new ways technologies can add value, disrupt markets, and create a blue ocean opportunity. Atle is also interested in the future for information workers with improved usability, mobility, knowledge sharing, and retention. Renowned as a very energetic and lively speaker, Atle is frequently asked to present at AIIM, Gartner, and industry conferences throughout the world. His background as one of the most experienced and well-known ECM trainers in the world makes him knowledgeable in a wide range of topics.

Everybody is now talking about the need for a digital transformation. Companies need to improve digital engagement and corporate productivity to serve better click-to-brick customers and millennials entering the workplace, expecting online services, and almost instant gratification.

Over the past decade, there has been a “perfect storm” of change driven by consumerization, cloud, mobile, and the Internet of Things. It has changed how enterprise information and IT are viewed and changed the kinds of skills that are needed to adapt to these disruptions. The value-add for information technology in organizations is rapidly shifting from the technology per se to the stewardship, optimization, and application of the information assets themselves. 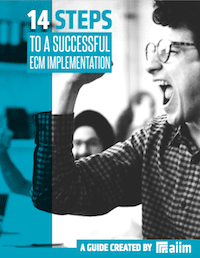 Why You Should Think about a Mobile First Strategy

4 Reasons for Replacing Email with New and Better Collaboration Tools

How to Improve Digital Productivity?

Many corporations waste their IT budgets on the “T" instead of benefiting from the “I" in IT. Information can be used to reduce costs, manage risks, add value, or even create a "blue ocean" opportunity. Let me therefore give you two ways you can change the game and make a dent in the universe.